Top Round Roast
(Inside Round)

Alternative Names: Inside Round, Topside, Top Round First Cut

The top picture is a whole top round trimmed with a thin layer of fat covering the top of the roast. 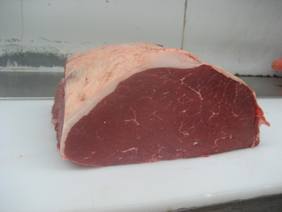 Top Round (Inside Round)

In the middle picture the top round is cut down the middle and each half is than tied producing a 4-5 lb. roast. 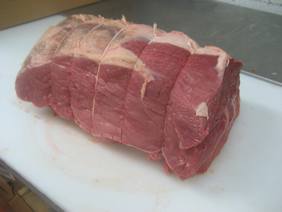 Top Round (Inside Round)

The bottom picture is a small 2-2.5lb. roast cut from the 4-5 lb. roast in center picture. 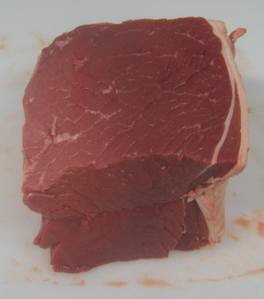 Top Round Roast (Inside Round)

The top round roast or in Canada called inside round roast, is the most tender of the round cuts.

This affordable cut is the most common choice in supermarkets, its lean and takes well to marinades and sauces , is well suited for stews.

Because it contains the largest single muscle in the cow, top round is often used by delis and restaurants for beef roast recipes.

It has good flavor, texture and juiciness, but can be dry and mealy if overcooked and should be sliced thin.

To bring out additional flavor and produce a more buttery texture you can dry age this oven roast for a few days. Age the beef in the refrigerator by leaving it uncovered on a wire rack over a pan to catch the drippings for at least a day or as long as 3-4 days.

When you are ready to cook the roast, trim off any dried pieces after the aging. It is common for a roast to lose 5%-15% of its weight during the aging.

A low temperature of 250 degrees will cook the meat evenly through from the center to the outer edge without any drying out, leaving the meat tender and juicy.

You might be concerned about the possibility of bacteria and it has been shown that this way of cooking is actually safe but to have piece of mind there is a way to solve this and at the same time give the roast a nice brown surface.

Bacteria grows from the outside and a way to get rid of bacteria is to sear the roast first. Searing the roast will seal in the juices leaving this round roast recipe looking very appealing when being served.

1. An hour before cooking, remove the top round roast from the refrigerator to bring to room temperature.

2. Preheat the oven to 250 degrees and set the rack to the lower middle position.

Take a heavy bottomed roasting pan and depending on the size of the pan you will be using, set the pan on 1 burner or 2 burners if you have a large pan and set the temperature to medium-high.

Once the pan is hot sear the roast on all sides for about 6-8 minutes total time. A frying pan also can be used to sear the roast.

3. Carefully remove the top round roast, set a wire rack in center of the roasting pan and place roast fat side up on the rack.

Season with salt and pepper and generously sprinkle your favorite seasonings, such as onion or garlic powder etc. Cloves of garlic may be used cut in half lengthwise and with a small knife cut small slits into the top of the roast and insert the garlic clove halves into the roast.

4. Transfer the pot to the oven and cook, uncovered until an instant-read thermometer inserted into the thickest part of the roast registers 110 degrees, about 1-2 hours depending on size and shape. I recommend checking the temperature 45 minutes to 1 hour after entering the oven.

5. Adjust oven temperature to 500 degrees and cook until the internal temperature reaches 130-140 degrees, about 15-20 minutes.

6. Remove the roast from oven and tent with foil. Let it rest at least 15- 20 minutes to allow the juices to redistribute themselves evenly throughout the roast.

Below is a cooking chart for cooking top round roast. Remember you should always use an instant-read thermometer to check the doneness of a roast. The internal temperature will rise about 5-10 degrees during resting time, remove the roast 5-10 degrees before desired doneness.

Top Round Roast (Inside Round)